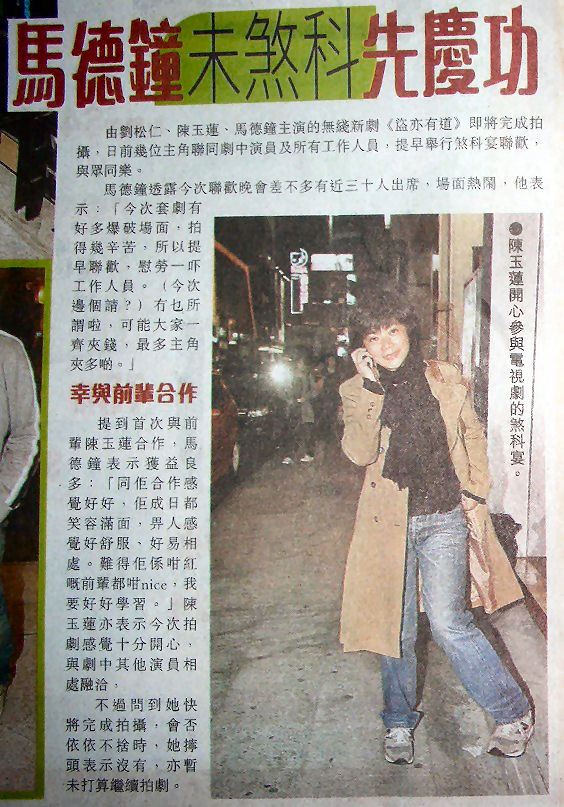 The other night, Idy Chan was one of the special guests attending “Hong Kong Confucianism Inauguration” dinner banquet in Shatin. She said “All day I had been doing charity work, all I want is to broaden my own wisdom.” Having finished filming TVB series [Catch Me Now 盜亦有道], she expressed “When filming started, I had problem with my voice, even now not completely recovered, so TVB arranged me to do voice dubbing for my part. Asked if she’d film again, she frankly said “Temporarily have no plans yet, however primarily I do charity work.”

2007.12.18 Idy Chan temporarily doesn’t have any plans for another series

Comments Off on 2007.12.18 Idy Chan temporarily doesn’t have any plans for another series
catch me now

Idy Chan attended a religious function in Shatin, though she doesn’t really show a great belief in any religions, just because she’s often doing charity work, and has to link up with different religious groups, therefore she has the basic understanding of almost every religion. Idy has finished filming a TVB series, however, there’s no talk for any project and she herself doesn’t have any plans for filming a new series. Because of loosing her voice during the filming of “Catch Me Now 盜亦有道” she still needs to do voice dubbing for her part.

[AppleDaily – @ActioNews] No holding hands no kisses [Translated by Kit]

Idy Chan 陳玉蓮 returned filming for TVB series “Catch Me Now 盜亦有道” after the 14-year absence on screen. Before filming she set rule of no sexy, no kiss and no love scenes for her. It has been almost 2 months past and the shooting is going to end. During the period and along the story develops, Damian Lau 劉松仁 and the director tried to make Idy break the rule but they didn’t get succeeded. In the end Damian can’t help but praised Idy as saint.

Idy Chan & Fala Chen 陳法拉 were shooting in Wu Kai Sha the other day. The plot was about these two good friends walking and chatting on the beach. It seemed they get along very well and they finished those 10 plus scenes in one shot. Behind the camera they studied the scripts together and filled the air with laughter.

Idy thinks 20 episodes are way too short and she didn’t feel tired from shooting all these times. But a pity that when she got herself fully into the work, it is going to end soon. However, she said she has not considered filming for another series or not.

Talking about the collaboration with Damian, Idy said she’d thought Damian as a serious guy but now she totally changed her views. She said, “I remember we had a dating scene to film and before the shooting Damian asked me if he could hold my hand. I smiled at him and then told him that it doesn’t necessary to hold hands during dating. Once the scene was done, he came to me and said, ‘It was already no holding hands on screen but can I hold your hand behind the scene just once?’ Then he laughed and walked off.”

And there was this wedding scene which the director and all the crew requested Idy to accept the kissing scene. But she said since she is playing a ‘silly woman’ so she can just pretend a bit shy and push Damian away, when he leans in for a kiss.” Finally the director agreed with her and said, “you won.” Damian also praised her a saint.

When asked her impression of Fala, Idy praises her as a smart and quick-learning girl. She memorizes the scripts very fast. On the other side, Fala said she did feel pressure when working with Idy in the first day but Idy taught me a lot how to speak the lines. “I’ve learnt a lot from her and Damian but it’s a pity that the filming is nearly finished.”

While mentioning Fala it made Idy think of Linda Chung 鍾嘉欣, she said, “I was dining in TVB canteen and suddenly Linda approached me. She told me she’s a fans of mine and asked if she could have lunch with me. She told me she couldn’t read Chinese so she sees them as pictures and it helps her memorize them fast.”

Idy has been returned to the showbiz over 2 months. People like crew workers or passers-by always requested taking photo with her which she never says no. She smiled, “Earlier in the costume function, the crew had discussed how to address me since they thought it is not respectful to call me Lin Mui. Actually I won’t mind that. Finally they came up with 3 titles – Lin Mui Jei Jei 蓮妹姐姐, Lin Jei Jei 蓮姐姐 and Gu Gu 姑姑. They just want to make it sound more warm.”

[Special Thanks to Kit for providing the clip! Idy were beautiful here. Besides Idy, I read that Ray Lui 呂良偉 and Kathy Chow 周海媚 were also the among the veterans who have recently re-associated with TVB and appeared as presenters at this awards show. Most of TVB 40th Anniversary shows and specials happened during the first week in I were in Hong Kong. But too bad that I had to attend Aaron Kwok 郭富城 shows and I was dosing off at most of his shows [5 shows]. Fans in HK are very aggressive and nuts! Anyway, Ray Lui went with his wife and kid to one of Aaron’s shows, but I was only able to get a glimpse of him after the concert. Wish I could watch this TVB Awards LIVE, just want to see Idy and other favorite veterans. Mr. Andy Lau 劉德華‘s billboards and ads are everywhere in HK, he’s still popular and looking handsome! I watched a few new TVB series while in HK, but there’s so many new faces and most of them are… ugly and most of the series suck (pardon my language)!]

[Linda Chung 鍾嘉欣‘s blog @ TVB] The other night at the company’s [TVB] canteen, I bumped into Idy Chan 陳玉蓮. She’s at the company that day to film “Catch Me Now 盜亦有道”, what a pity that I don’t have a role in it, no opportunity to learn from her. As I’ve always like her, this is the rare chance that I bumped into her, I invited her to eat together, unexpected she accepted, I’m so happy. We chatted about anything and everything. Never cross my mind that she’s noticed me and seen my work and expressed that she likes my performance in “Best Bet 迎妻接福”. Wah, I’m so very happy to receive her praise. 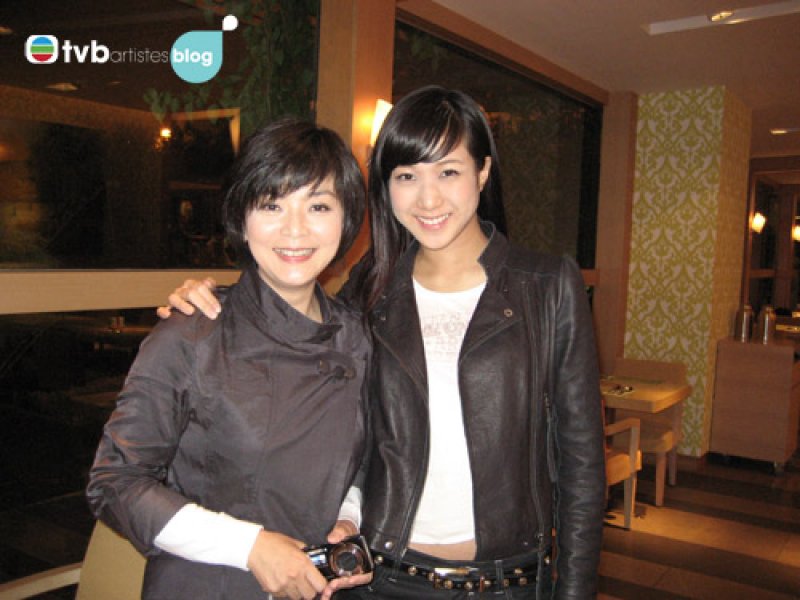 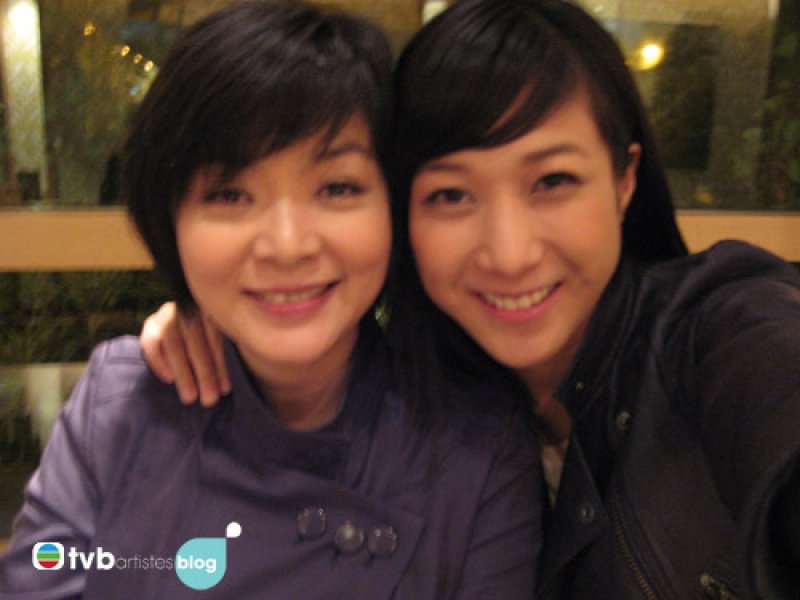 Sources: SingTao@Headline / GCMT /
[by Kit] The news mainly focuses on Fala Chen. It said that when she was filming together with Idy for “Catch Me Now 盜亦有道”, she apple-polished Idy alot, like help checking her make-up & hairdo, pay keen attention to what Idy was talking to her etc. [I took the photo for this page straight from TVB Weekly #542 – Special Issue for 40th Anniversary. I bought the magazine at an 7-11 store just a few blocks from my hotel. Besides the bottled green tea, this was actually the first thing I bought in HK and it’s amazing to be out on the streets in Hong Kong at 2-3am in the morning. Here in the States, just home and office, how boring!]

[AppleDaily]
The lover pair of TVB classic “The Return of Condor Heroes” (1983) is in the top 10 of 100 Greatest TV Characters by Apple Daily. Idy Chan‘s Little Dragon Girl is in 4th place, and Andy Lau‘s Yeung Gor ranked 9th.