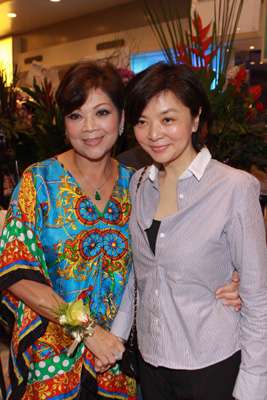 Idy Chan, 草蜢 Grasshopper trio, Wong Ka Keung, Chan Chi Keung, Soler brothers, EO2, and etc. come to show support for their friend Maria Cordero, who just opens a household goods store in Tseung Kwan O, and plans to expand up to 20 stores in next 3 to 5 months. Idy and Maria have known each other for many years, asked if she has any interest in doing business? She said there’s restaurant business in Shanghai, and already have many locations, and mostly managed by family members. She used to go Shanghai and helped out too, but in recent years, she’s been practicing self-cultivation. She’s responsible for the designs and uniforms for employees. She said there’s an offer for her to do a costume drama, but she had to return to Canada. And lately many mainland productions have roles for her. Asking on if she’s asking for high fees? Idy said, “No, now acting for me is not about money.” She wishes to make an action costume drama, not afraid of hard work, and hopes that action actors and directors will appreciate her skills.

Asked if she has ever thought of working with Chow Yun Fat, she said “We never actually worked together at all. If he wishes to cooperate, then I could also wish the same”.