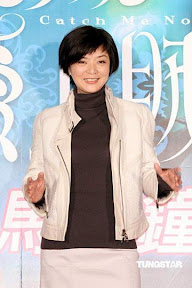 Idy Chan along with Joe Ma were in Taipei yesterday [Dec 8th] to promote the showing to “Catch Me Now” on Taiwan’s TVBS-G. Living up to her “Little Dragon Girl or SLL” nickname, Idy appeared simple and beautiful still, she acknowledged to Jin Yong’s comment on how she’s similar to SLL the most, that she’s active in helping the elders, mentally disordered children, martial arts excercising, mediation, living in seclusion, and volunteering in many charity organizations throughout US, Canada, and China. She even spent a month in Sichuan for Earthquake victims.

Joe Ma expressed “Seeing her is like a child seeing his teacher, I’m very honored to work with her.” Since Idy is being called as “Lin Mui”, at first Joe planned to address her as “Lin Je” but he feared it’s like calling her “old”. Joe said “Later when I hear everyone else calls ‘Lin Mui’, I’m no longer afraid. ” Joe’s looking forward to enjoy the local good food while in Taiwan.

Idy also expressed that she wants to do a documentary on Buddhism.