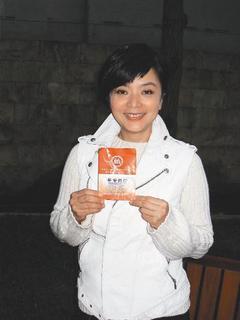 Idy Chan refused to talk about the rumors that she has won the lottery twice of about 400 million CNY [~58 million USD] “This is not to discuss”. Curiosity of Taiwan lottery is also in the play, with the belief in Buddhism, she responded “The impossible can become possible.”

As the world is in the economic turmoil, Idy shared “Perhaps, I’m especially being blessed, I initially gave some of my investment money to my brother & sister for family restaurant, and now they’re mainly providing me.”

Idy Chan presently owns 6 diners in Shanghai, acting as dummy director, and she’s living a simple modest life. “Believe it or not? I didn’t use any skin care products in 4 years, until recently, but I actually use salad oil to apply, they’re really effective.”

This time Idy hopes to make a Buddhist doctrine and spreading the teaching to young people, and in order to look good in the film, she wants to get thinner.